Falling in love with a book feels both wonderful and awful. Wonderful, because for a moment you’ve totally forgotten everything else. You’re lost in an imaginary world, where only the characters and their struggles exist. But it’s awful too, because a book always ends. At some point, you’ll have to close the pages and step away.

Sometimes it feels as though a book has ripped your heart out – which is totally crazy, because it’s only words on a page, right?

I fell deeply in love with each of these books. Each felt different to anything else I’d read before; each was fast-paced and exciting, and dragged me into a different world. Some are part of a series and some are standalone. If you do read any of these I can promise: you will not be bored.

Why I Fell in Love: Book Reviews 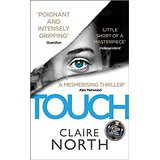 Everyone raves about Gone Girl, and it’s a wonderful book; exciting and suspenseful (plus, it made a great movie). But if you like suspense and seat-of-your pants reading, you must read Claire North.

Claire North is a pseudonym of Catherine Webb, a British writer who wrote her first book at the age of just fourteen. Yes, you read that correctly.

Touch is about Kepler, a being who can slide inside other people’s bodies, just by touching them. Kepler has no sex; he/she is the person he inhabits. He’s also a broker, finding bodies for other beings like him. But someone, or something, is after him, and now he’s on the run. In Touch, Kepler moves from body to body, on a quest to find a nightmare. Do you suddenly wake up, with no recollection of where you’ve been, or how you’ve got there? Have you been losing time? Perhaps Kepler’s been using you. 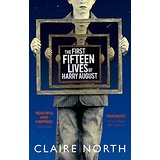 Harry August lives his life over and over again. Each time he dies he finds himself reborn in a restroom in 1919. He is an Ouroboran, destined to repeat his life. He is not alone; there’s a club of members who pass messages throughout time, from one Ouroboran to another. Don’t let the sci-fi premise put you off, because at its heart, Harry August is both a thriller and an intriguing tale about one man’s struggle with loneliness. Hilary St John Mandel is a Canadian writer; this is her fourth novel. It’s a powerhouse of a story, and has one of the most complex narratives I’ve  read. The story weaves back in forward through time, beginning with the death of Arthur Leander in London. Leander, playing the role of Lear, collapses on stage of a heart attack, just before the beginning of a pandemic that spreads rapidly through the world, annihilating civilisation and grounding planes. Station Eleven moves through multiple points of view: Arthur, his ex-wife, a child actor, an audience paramedic. Each character has their own story to tell. The pace is extraordinary; for such a complex novel, it’s never boring, and at sometimes so mind-blowing I couldn’t bear to put it down. This was my must-read novel of 2015, and I’ve already read it again since. 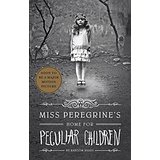 Jacob  always thought his grandfather couldn’t distinguish truth from fiction; his tales of growing up in an orphanage filled with children of peculiar gifts seemed a fantasy to obscure the truth – that his family was murdered by the Nazis in WW2. But when his grandfather is murdered, Jacob realizes that perhaps the truth is stranger than he’d thought. I’m in awe of this book. Not only because of its wonderful story, but because of the craft behind it. Riggs does a wonderful job of scenes with multiple characters (it’s really hard to do this and not get the reader confused) and his prose is both economical and powerful, a trait only the best writers display. Miss Peregrine is illustrated by the most awesomely bizarre photos. It was these photos that were the genesis of the story, and its worth getting the hard copy of the book rather than a download, simply because of these images.

Miss Peregrine’s being made into a movie, due for release shortly, and since I read this book there have been two more books in the series published. Miss Peregrine’s is one of those stories that’s so perfect in itself that it makes me reluctant to read the rest of the series, in case it can’t live up to the promise of the first!

The Dream Thieves by Maggie Stievfater (The Raven Cycle)

Compared to the other 4 books listed in this post, The Dream Thieves isn’t that complex. Set in Aglionby Academy, it tells the story of the extraordinary Ronan, a psychic called Blue and their mad friends. The Dream Thieves contains a sometimes bizarre, always exciting mix of drag racing, ghosts and dead Welsh kings. If you enjoy fantasy, adventure and historical references this is a must-read.

Confession time: I haven’t read the last book in The Raven Cycle yet! Like Miss Peregrine I’m almost scared to, because the rest of the series was just so great that I don’t want to be disappointed at the end.

I read a lot of books. Some of them I put on my shelf at Goodreads.com , although recently I’ve been slack and haven’t been as religious at filing them as I should. (I might update it shortly, so keep an eye out). But even though I read a LOT, I rarely fall in love.