Where is A Skillful Warrior Set?

Paulo Coelho’s advice to aspiring writers: don’t keep a notebook. Just live your life. The things that are important will remain, and those that are not will fall away.I do keep a notebook, but not for recording thoughts and impressions. I keep my notebook for when I don’t have a computer with me. Sometimes this bothers me, as though I’m not a real writer.

But surprisingly, when it comes to story setting, I don’t need a notebook. I rely on memory. Take A Skillful Warrior, and its settings.

The Settings of A Skillful Warrior…

The story opens with Will, Dana, Jed and N’tombe travelling beside a river towards a moorland plateau.

Later, Will and Jed find a hotel in a fishing village just north of a town called Abervale. Nearby is a tower, like a castle, set into the sea, and accessible from the clifftop by a narrow bridge. Jed falls afoul of its owner, a woman named Ma Evans.

A little later there’s a scene where Dana meets a goat herder. He takes her to meet his family, and they share food and a lice-infested cave.

The last scenes of the book are in a maze-like network of narrow canyons. Once, long ago, people lived in hollow caves, carved from the rock. Now, all the caves are abandoned; the only sound is the wind, whistling sadly through the empty holes. 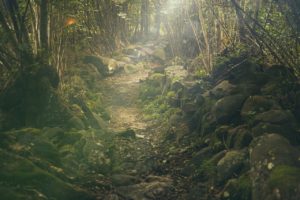 …And The Real-Life Places

The river valley of my imagination was the Conwy River, in Gwynedd, North Wales. I worked as a physiotherapist in Llandudno Hospital in the 90s. Many of my patients were small-holding sheep farmers, wiry tough little men who eeked out a living in the harsh pasture of the Upper Conwy.

I went hiking in the Conwy Vale in my weekends, and gained a first-hand insight into why my patients had such bad knees!

Where the Conwy River meets the sea lies a castle, one of my favourite castles in all Wales (and there are plenty there to choose from, thanks to Edward I and his bottomless treasury), and the gorgeous medieval market-town of Conwy.

Back in the 90s I had no idea of writing a book, let alone a trilogy, so never really meant to cast these places as locations, but they crept into the book nonetheless.

Abervale and the nearby fishing village of Towyn are totally fictional, but I used drawings of old Exeter – the Exeter from before the bombing raids of WW2 – and Chester (which was not so damaged) to form the idea of the narrow streets and over-leaning tudor-style post and beam buildings of Towyn. The tower in the sea is totally made up, although Tintagel Castle, built into the clifftops of North Cornwall, and Mary Stewart’s Merlin Trilogy (see an earlier blog post) acted as a catalyst.

The goat-herder lived in the Sinai Mountains. I holidayed on the Sinai Peninsula nearly twenty years ago – diving and snorkelling, as you do – and the camel-riding, landrover driving Bedouin were a familiar sight along the coast. Later, we travelled into Petra. If you’ve ever been to Petra you’ll understand how powerful the landscape is; how evocative, and how lonely. Once you leave the beaten tourist trail you realise just how vast the place was. Once it must have been simply crowded with people. High in the cliff walls are thousands of holes – cave homes, now empty. Except for the lice that are legendary among backpackers.

In one of these lonely caves we met with a goat-herder and his family. This wasn’t their regular home – the government had moved all the inhabitants away – but periodically they’d return, bringing their animals and their furnishings with them. They welcomed us into their cave-home, plied us with hot sweet tea and offered to be our guides for the day. Such hospitality is common among the Bedu, or so I’m told.

It’s strange how tiny events, not even important at the time, remain in the subconscious and eventually make their way into a story.

Makes me glad I didn’t bother with a notebook.