Forbidden Love: A Book Review of The Larnachs

I thought it would be fun to do a series of posts based on the local literary scene.

Side note: I live in Dunedin, a UNESCO city of literature, where we’re blessed with an extraordinary amount of books, novels, authors and artists.

The Larnachs by Owen Marshall 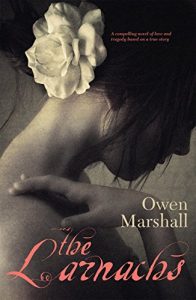 The Larnachs, by Owen Marshall.

Here’s my review from Goodreads:

The Larnachs is a beautifully told tale of a forbidden love affair. This story is based on the true story of Constance Larnach and her step-son, Dougie Larnach, and her husband, William Larnach, a self-made millionaire, politician, and dreamer. Larnach’s now mostly known for his eponymous Castle, but in the days of the disastrous affair, he was a member of parliament and a well-known figure in Dunedin.

The story moves between Dougie and Constance’s point of view, and as the narrative moves inevitably to its terrible ending, the reader can’t help feel sympathy for the star-crossed lovers. I particularly enjoyed this book as its set really close to me, so I know the locations well.

Marshall’s done a lovely job of interweaving local lore with historical fact, but The Larnachs never slips into drily-told history.

I thoroughly recommend this book, partly because of the historical context, but also because it poses a central question: what to do when you fall in love with someone totally off-limits? Can love really conquer all?