Anyone who’s read A Necklace of Souls will know I love writing (and reading) about Girls With Swords. I have NO idea where this came from. As a child, no-one put a blade in my hand and whispered: “Go! Fight!” But somehow, I love stories about women who fight.

When I was growing up, back in the dark ages of black and white television and dinosaurs, it was hard to find stories about fighting females. They were a rarity, a throwback to B-grade sixties movies.

But  recently there’s been a plethora of stories of girls who not only fight, but who win.

I’ve put a short review of my top four of these books in this post, in ascending order.

Each of these books are really well written, fast-paced, with great characters. Each one leaves me desperately envious. Why? Because I wish I’d written them.

Ah well, never mind. I have my own tales to tell.

Throne of Glass starts with a bang. Celaena Sardothien, erstwhile Royal Assassin, is serving a sentence in the salt mines, when she’s offered a choice. Fight as champion for the Crown Prince, or return to prison. The reader plunges straight into the story, and there’s no going back. Throne of Glass is the first in a series, and while its sequels, Crown of Midnight and Heir of Fire (and more recently, Empire of Storms), are exciting and fun and keep you up at night, Throne of Glass is my favourite.

Just a warning: if you like strong male leads as well as female, and you’re not keen on instalove or love triangles, you may not like Throne of Glass. But what the hey, the fight scenes are excellent!

Maas has written another series, Court of Throne and Roses, a Beauty and the Beast retelling . I’ve not read this yet, but its definitely on the TBR list!

3. The Raven Boys by Maggie Stievfater 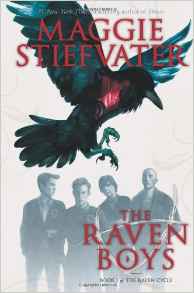 The Raven Boys, first in the four-part series of The Raven Cycle, is a fabulous read. Although it isn’t really a Girls-with-Sword adventure,  I’ve included it here because a) I love the characters and b) I wish I’d written it.

The Raven Cycle tells the story of three boys and their friend, Blue, daughter of a clairvoyant. The boys are on a quest for a dead Welsh king and Blue is on a quest to stop one of them becoming dead. The problem is, she knows she’s going to fail.

The characters in this story simply leap from the pages, especially Blue’s mad clairvoyant family, and there’s a healthy mix of mysticism, magic and street racing. There’s a bit of romance, too, but it’s not overwhelming and never gets in the way of the story. This is a story that boys will enjoy just as much as girls.

2. A Gathering of Shadows by VE Schwab I’ve just finished this book, and I’m still reeling. First, because I read the series in the wrong frigging order. If you’re going to read this series, people, and I highly, highly recommend it, START AT THE BEGINNING.

The first in this series is called A Darker Shade of Magic. I can’t talk about it, because I haven’t read it yet, but I can talk about its sequel, A Gathering of Shadows.

A Gathering of Shadows is about a thief named Delilah Bard, a wizard named Kell and three different Londons: Red, Grey and White. And a contest. It’s a fun, fun read, contains fantastic world-building, and deals with difficult concepts, including home, and freedom and how do we know we’re alive. This book (this series) will be loved by both males and females, which I think makes it quite unique in these days of very polarising YA reads. And, as an extra bonus, there is NO love triangle. Amazing! Published in 2009, Graceling quickly became a sensation. I can see why; the story is about Katsa, a girl Graced in fighting. She’s smart but forever separate, not only because she’s use by the king as his private army, but because she has a deformity: her eyes are different colour.

All Graced have different coloured eyes, and they’re all feared because of it. Katsa, though, is feared more than most, until one day she meets a young man with different coloured eyes. Graceling is about survival and self-knowledge and courage. It’s won multiple awards and is one of my favourite books. One of its strengths is that it’s a stand-alone story. There are others in the same world (Fire and Bitterblue) but to my mind they lack the strength and the lyricism of Graceling.

Finally, as a small digression: Kell, in A Gathering of Shadows, has eyes of two colours. That’s how you know he’s Antari, a magician. Katsa, being Graced, has different coloured eyes. Clearly, there is something to be said for having eyes of  different colours.

A strange, and probably unrelated fact: My eyes are different colours. One is blue, and one is grey.  I am not, as yet, a magician. Still, I live in hope.