If you love all things period romance, here’s 4 books I guarantee you’ll love.

But first, That Shirt… 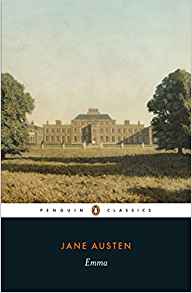 Emma is the second-best Jane Austen novel after Pride and Prejudice. Well, that’s what I think!

Emma, a rich and beautiful woman, is certain she should be a wonderful matchmaker — why, she knows which man deserves which woman, better even than the individuals themselves…

Like Pride and Prejudice, Emma is very funny and with a surprisingly contemporary tone. Personally, I don’t find it quite as fast-paced as P&P, but it’s still an enjoyable read.

Emma has been made into television shows, movies, stage plays.

Here’s one of my favourite clips from Gwyeneth Paltrow’s version.

Charlotte Bronte’s gothic novel about a governess who falls in love with her charge’s father is considerably darker than Austen’s romances.

Jane Eyre is a story of love and loss; of deceit and poverty. I love the settings of Jane Eyre, and Mr Rochester has, I think, more depth than many of Austen’s characters.

BUT — there’s not a whole heap of fun in this book.

However, if you like period romances with a gothic twist you must read Jane Eyre. In this work Bronte created a genre that we’re still enjoying today. From Twilight to Feverborn, readers love the attraction of the dark.

The movie trailer below shows why.

3.  Three Men in a Boat by Jerome K Jerome

Three Men in A Boat is SUCH a good book! Like Pride and Prejudice, Three Men in a Boat (To Say Nothing of the Dog) is laugh-out-loud funny, and like P&P, it’s true to its era.

Unlike P&P, it’s not a romance. Three Men in a Boat is a travel book, quite possibly the first of its kind! It reads a little like Bill Bryson meets Queen Victoria.

Three Men in A Boat tells the tale of three (slightly hypochondriac) men who feel they need a holiday. So they take a week to travel from London to Oxford by rowing upstream along the Thames.

The story meanders like the river, moving from anecdote to anecdote, and as long as you’re happy to not journey in a straight line, it’s highly enjoyable. Published in 1889, Three Men in a Boat was a hit almost as soon as it hit the stores, and has retained all its charm.

I’ve actually rowed part of the portion in the book, and the descriptions are still accurate. Not all of the pubs remain, alas :).

It’s been made into TV, movies and has ripped off by plenty of comedians and writers. Watch this clip! 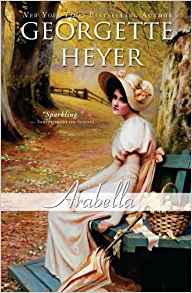 If you haven’t yet discovered Georgette Heyer, you’re in for a treat! Heyer specialised in regency romances and despite being written in the 1950s, her books feel true to period.

Like Austen, Heyer is very funny and like Austen, she manages to move between third-person limited point of view and third-person omniscient effortlessly. Note to non-writers: this is very hard to do.

Arabella has the classic prejudice of a heroine to the hero; and the hero in Arabella, is extremely proud, but the story is faster-paced than Austen’s.

A brief summary: Arabella is to journey to London to stay with her godmother. The oldest of eight children, from a penniless-but-respectable family, she knows it is her duty to marry well. Unfortunately, she convinces the monde that she is an heiress…

Heyer’s books are superbly written. They’ve been continuously in print since their first edition, and their popularity remains high. However, they’ve never been turned into television or movie, which is a real shame, and Heyer herself never appeared to gain recognition within the literary community.

But if you love P&P, Arabella is the ONE book in this list you must try. And once you read it, you’ll be hooked for life!

If you’re still short of reading material here’s some other works that are similar to P&P. These books were either written in the same period as Austen, or their tone is similar. The links here lead to the Amazon store, so you can check the description.

The Grand Sophy – by Georgette Heyer

You could also check out the Silver Petticoat Review; a blog for all things romantic!

Over to you – any books you’d recommend?

Just after writing this post, the Bank of England released a new 10 pound bank note. The bank note features Jane Austen, along with a quote from Pride and Prejudice!

“I declare after all there is no enjoyment like reading”

Ironically, this line is spoken by Caroline Bingley — a character who in Pride and Prejudice who is far more interested in Mr Darcy than books.

This bank note makes Jane Austen to be the only woman (apart from the Queen) to be depicted on a UK bank note.