Have you seen Ready Player One?

In case you’ve not watched it, nor read the book, here’s a quick summary: 16-year-old poverty-stricken Wade Watts is searching for a prize hidden inside the Oasis, the world’s online forum/trading place/gaming place/school venue. It’s where most people spend their days, hidden behind virtual headsets.

The year is 2040; the Oasis’s reclusive developer, James Halliday, has just died, leaving his fortune and control of the Oasis to the person who can find the three keys that unlock the prize, or ‘easter egg’, hidden within the Oasis. But an evil corporation is also seeking the egg. Can Wade save the Oasis (and the world) before it’s too late? 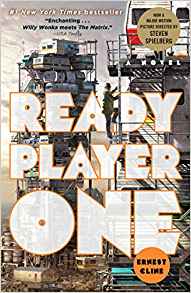 The story takes place in both the virtual and the real, and through the story Wade meets the fetching Art3mis (pronounced Artemis, how clever), faces his fears, learns about friendship and loyalty.

Watching the movie felt weirdly familiar, partly because the story references the 80s like they were the coolest time ever, and partly because I’ve read a heck of a lot of books similar to RP1.

There ain’t nothing like Spielberg for storytelling, plus you gotta love the meta-ness of Spielberg making a nostalgia-fest of the 80s when he was responsible for much of its pop-culture. And of course, the special effects are great. There’s a few logistical/plot hole questions but hey, it’s a movie, right?

However, the book troubles me. Ready Player One was a best seller, but I have no idea why. I thought it was slow, badly written and full of formulaic tropes. But the thing that annoyed me the most was that there are way, way better books around, but they’re not as famous, and so have gradually dwindled into undeserved obscurity.

If you loved Ready Player One – great! I’m glad it worked for you. Not every book speaks to every reader; that’s cool.

But if you enjoyed RP1, then you’re in luck, because the world is full of books that are EVEN BETTER. Try these stories below. They’re all science fiction, dealing with the intersection between the virtual the real (also known as cyberpunk) but I think they’re more innovative, creative and way more entertaining.

Only You Can Save Mankind – Terry Pratchett Johnny Maxwell has a new video game – defeat the alien ScreeWee. But if the ScreeWee refuse to fight? Worse, what if they surrender? Then the aliens disappear from the game, only to begin invading his dreams. With the help of another player (handle “Sigourney”), Johnny must save the world, save the ScreeWee and work out what is real, and what is not.

The story is hilarious; my personal favourite is Johnny’s friend Wobbler, who creates a game called “Journey to Alpha Centauri” which has to be played in real time, thus taking 3000 years to complete.

Johnny and his friends star in two later novels: Johnny and the Dead and Johnny and the Bomb. In all three stories, Pratchett deals with real-life issues, but always with his trademark humor.

The Johnny stories were some of Pratchett’s favourite works, but they never sold as well as his Disc World series.

I’ve really enjoyed exploring them again with my kids; although the tech references are dated, the ideas are still interesting, and Pratchett’s characters are vivid and exciting. Tip: get the audiobooks. They’re a lot of fun for car journeys, especially the voices of the ScreeWee. Appropriate for ages 9 and up.

Find Only You Can Save Mankind on Amazon: https://amzn.to/2rx1GF9

Body of Glass – Marge Piercy. (Also published as He, She and It). 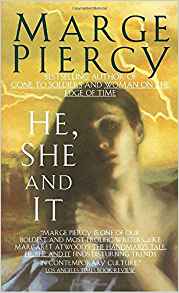 Published in 1991, Body of Glass was one of the first novels to explore characters shifting between the physical to the virtual worlds, and was awarded the Arthur C Clarke Award in 1993.

Shira, an expert in cyber socialization, works for Y-S, a multi. She lives under a glass dome, safe from the environmental pollution that’s killed much of North America. But when her ex-husband wins custody of her son, she decides its time to return to her home town Tikva, and begins working on a new project: the cyborg Yod. As she learns to live without her son, she realises that Tikva is under attack, and Yod is to be its defender.

The book cuts between the past and the present, and deals with gender identity, sexualisation and race. It’s scarily prescient, with topics like: what is a cyborg? Where does humanity begin and end?

The sex scenes are reasonably descriptive, so I wouldn’t recommend this for early YAs but it’s suitable for late teens, and definitely recommended for girls – its unusual to see women cast in starring roles in sci-fi. It’s set in a Jewish community, and I totally enjoyed the opportunity to read and learn about this culture.

Piercy also wrote Woman on the Edge of Time, an unnervingly accurate novel about the future.

Find He, She and It on Amazon: https://amzn.to/2rx1shh 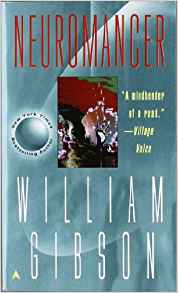 Neuromancer won the Nebula Award, the Philip K Dick Award and the Hugo Award in 1984. Case, a washed up computer hacker, is hired to conduct a hit on a powerful artificial intelligence. He’s assisted by razor girl Molly Millions, an augmented street samurai with mirror-eyes. Together they discover why Case has been hired, and the identity of who it was who hired him. The story ends with the world changing, as a new AI is born.

Neuromancer birthed the terms ‘Matrix’, ‘hacker’, ‘cyberspace’, and is at least partially credited with having spawned the internet as we know it. Gibson himself says this isn’t true; that he saw the trends emerging and ran with them. Whatever the truth to the tale, there’s no doubt that Neuromancer both reflected and shaped reality.

Although the book isn’t as good as, I think, Gibson’s more recent works, it’s still an amazing, sometimes puzzling read. It’s suitable for older readers, especially teens who love tech. The language is dense and sometimes hard to follow, so better for competent readers.

Incidentally, if you like the concept of Neuromancer but find the actual story too complex, try Burning Chrome, Gibson’s first story collection, published in 1981. It’s a little easier to read, but still has Molly Millions, dancing in black leather with her silver-mirror eyes. 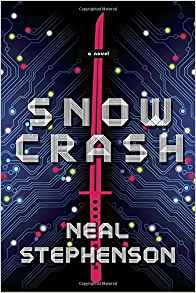 Stephenson works part-time for Amazon-owner Jeff Bezos, as his ‘chief futurist’, so he’s uniquely placed to both dream and implement the future.

Snow Crash, released in 1992, is one of his earlier works. It’s a racy, exciting ride with a page-turning, complex plot and intriguing characters.

Our hero is Hiro Protagonist, a part-time pizza delivery boy for the Mafia, part-time builder of the Metaverse, an emerging cyberspace landscape. Hiro is rescued from pizza-delivery death by Y. T.,  a young skateboard Kourier. Y.T. (“don’t call me ‘Whitey’, I’m Y.T.”) and Hiro embark on a quest to find the creator of Snow Death, a computer virus that threatens to destroy the Metaverse, before it infects the real world.

Snow Crash does contain some info dumps, in the form of the Librarian (oh, how Ready Player One), but the actual story is so exciting that its easy to forgive this small sin. It’s a great read for smart older teens and adults.

I heard that Snow Crash is being made into a TV series by Amazon (of course)! If so, it will be amazing. Oh, and if you enjoyed Snow Crash, you’re in luck, because Stephenson is a prolific writer of very fat books, so you’ll be happily occupied for weeks!