Did you binge-watch Stranger Things 1 &2? Were you bereft when the series ended?

If you enjoyed Stranger Things – here’s 5 books to try.

All these stories have things similar to the TV series: they’ve got kids as protagonists, they’re set in a twisted version of the real world, and there are hidden entrances to and from a hidden, unseen dimension. And they all have a noir, gothic vibe.

This wonderful story is about two adversaries, doomed to fight a deathly battle. Their battleground? A circus. But not your average circus: no – this is The Night Circus, a place of mystery, illusion and magic. Casper and Johnny call their new stepfather ‘the ogre.’ Until he gives them a chemistry set. And things begin to change… Like, they discover flying … The Ogre Downstairs is suitable for ages 9+ and it’s a great read-aloud story. 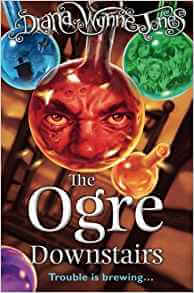 Definitely not suitable for bed-time reading, this is Stephen King’s first published novel. Carrie is a girl with strange abilities, a religious zealot mother and a dysfunctional high-school. Unlike Stranger Things, Carrie doesn’t contain portals – but there’s definitely a darkness to this story. I would bet it was an influence on Stranger Things.

Everyone knows about this book! The reason I’ve put it in this list? It’s because the film-makers actually talked about the importance of having a ‘Voldemort’ figure in the sequel. I’m sure they unconsciously (or consciously) drew themes from the Potter world. There’s no magic in Stranger Things, but there’s kids and portals and the powers of darkness, so there are definite similarities.

True disclosure: I’ve not read Cthulhu. But it is so important to the horror genre, and especially to D&D players, I had to add it. Besides, the Duffer brothers referenced it also, when talking about how they developed their antagonist.

Cthulhu was published in 1928, and documents the “Great Old Ones,” mysterious creatures that kind of look like people with octopus heads. The Cthulhu once ruled Earth, and by the end of the story they may again… Lovecraft’s influence on fantasy horror is huge, and the concept of the Cthulhu has been used over and over again, in a variety of literature.