Are you looking for a great book to read on holiday? Well, I’ve just been on holiday! Lucky me 🙂

On this holiday I’ve discovered three AMAZING reads that I’d love to share with you. Here’s some of them: 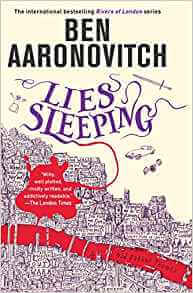 The newest release from Doctor Who writer Ben Aaronovitch is out! Lies Sleeping is the most recent instalment in the Rivers of London series. If you’ve not yet discovered the Rivers of London, then lucky you, because you’re in for a treat. These stories, set mostly in London, follow the adventures of Peter Grant, Detective Constable and apprentice wizard. Although each story is a stand-alone, they do form a continuous adventure, so you’re best to start at the beginning and read right through if you can. More information on the Rivers of London series here: rlstedman.com/doctor-who

In Lies Sleeping, Peter is fighting the Faceless Man and his ex-copper friend, Lesley, to prevent the downfall of London. Will he be able to solve the clues and so prevent the end of the world as he knows it?

In the story we also learn more about the nature of Molly, the mysterious domestic servant at The Folly, the Wizard’s Headquarters in London (and never to be referred to as Hogwarts, because Hogwarts is fictional!). Of course, we see more of Beverley Brook, Peter’s girlfriend and part-time goddess, and discover the true story behind the nefarious Mr Punch.

I’ve thoroughly enjoyed reading the Rivers of London: the characters are lively, funny and believable and each book is a gripping read. The settings are great, too – Peter always comments on the architecture or the scenery, so these books are better than a guidebook! I used to live on the Kennet Canal, which feeds into the Thames, so it’s a lot of fun to read about an area I know well.

To be honest, I didn’t find Lies Sleeping quite as good as the earlier books in the series – I do wonder if Aaronovitch is getting a little over Peter Grant. But still, it’s a great read, and full of the trademark Londonisms and snarky humor that sets this series apart. Highly recommended,  especially if you’re planning a visit to London. Hyperion is a stunning book! If you love epic science fiction, like Dune or Asimov’s Foundation Series, Hyperion is a must-read. Here’s the blurb from Amazon:

Hyperion tells the backstory of seven pilgrims who set forth on a final voyage to Hyperion and to the Shrike. Each pilgrim has had their own encounter with the Shrike, and each relays this in their own voice.

Hyperion is beautifully written, and the characters and action are unbelievably good. Like the best stories, Hyperion deals with the nature of evil, the evidence for God, and the reason for existence, all set against a backdrop of exceptionally gifted world-building.

I have a little quibble about the role of women in the story (I felt that most of the women in this story were there for sexual interest only) but whatever, Simmons is not the first sci-fi writer to relegate women from the action, and at least the book is amazing.

Part Canterbury Tales, part Keatsian epic (‘Hyperion’ is also a poem by John Keats), this is one of those stories you have to read again and again. It’s a classic (and I can’t believe I’ve only just heard about it!). My son told me about this book, which only goes to show that it is so worth getting your kids into science fiction.

Find Hyperion on AMAZON at: https://amzn.to/2SHRqWG

The Wizards of Once – Cressida Cowell A new book by the author of How To Train Your Dragon, this is a fabulous fantasy story.

“Once there were Wizards, who were Magic, and Warriors, who were not. And there were Witches, too, who wove evil magic: the kind of magic that kills larks and brings only darkness. But Witches were all killed by the Warriors – or so it is thought. Until Xar, son of the King of Wizards and Wish, daughter of the Warrior Queen collide in the wildwood … And magic is changed forever.”

Wizards of Once is probably aimed at competent middle grade readers around 9 – 13 years, but I totally enjoyed it, much to my nephew’s amusement! 🙂

Cowell is a fantastic author: the story rips along, and the characters are beautifully drawn (literally, as the book is illustrated by Cowell herself). Wizards of Once felt like Diana Wynne Jones crossed with Roald Dahl and flavoured with a little bit of Alan Garner. Anyone who enjoys English-based fantasy will love this story.

I’ve not listened to the Audio version, but it might be worth checking the audio edition, if only because David Tennant (aka Doctor Who) is the narrator.

Find The Wizards of Once on Amazon at: https://amzn.to/2Fi40Ir